​The Duke Herbarium (DUKE) supports a broad spectrum of biological research, both within Duke, and abroad. We frequently host visitors from other institutions, and DUKE specimens are cited in hundreds of publications.

DBI-0444586, Databasing Bryophytes from the Southeastern U.S. in the Duke University Herbarium (2005-2010) resulted in databasing fifty thousand records of mosses and liverworts and creating a Specify software-based online search of both bryophyte and lichen catalogs. PI: J. Shaw. Award Amount: $412,012.

DBI-0646452, A Plan to Rehouse and Reorganize the Vascular Plant Herbarium and Botanical Library at Duke University (DUKE) (2007-2011) resulted in the entire angiosperm collection being moved into a new physical space at Duke that was outfitted with compactors. PIs: K. Pryer and M. Windham. Award Amount: $467,691.

DBI-1410439 Digitization TCN: Collaborative Research: The Key to the Cabinets: Building and Sustaining a Research Database for a Global Biodiversity Hotspot (2014-2019 -- SERNEC consortium). In this project, Duke vascular plants from the Southeast were digitized [Subaward to M. Windham from UNC-CH]. Award Amount: $343,596.

Much of the research role of the collection is fulfilled through its active loan program. For example, from 2005 to 2009, DUKE lent over 17,000 specimens to outside researchers (thus permitting scientists at other institutions to access our data) and borrowed over 32,000 specimens (thus allowing DUKE-affiliated scientists access to the data from other collections). 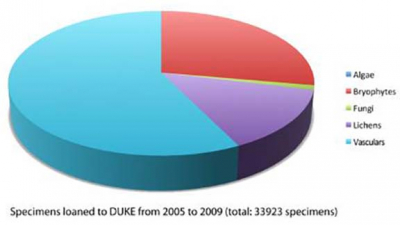 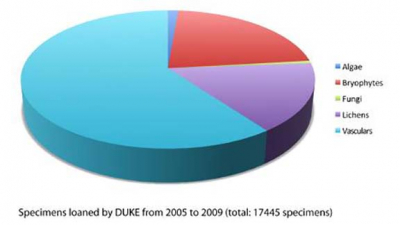